Winter the Dolphin Passes Away at 16 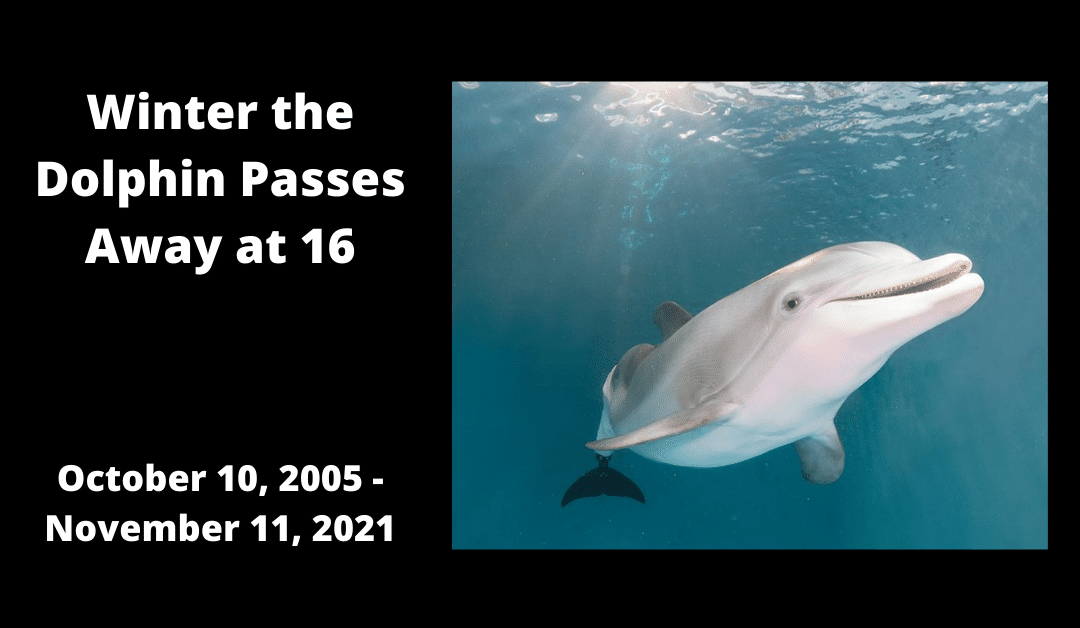 Winter is a dolphin who was stranded on a beach with wire around her tail in Florida. She was rescued by the team at Clearwater Marine Aquarium in 2005.

When Winter got to the Clearwater Marine Aquarium (CMA), the medical team observed she was swimming in such a way that was hurting her spine, and would eventually paralyze her. They brought in a team of doctors to help fit her with a prosthetic tail, but she rejected a few of them prior to finding the correct one that would work with her body and new swimming pattern.

CMA posted an update on their Facebook page informing their followers of Winter’s passing on Thursday, November 11, 2021 at 9:51 P.M.

My sister informed me of Winter’s passing that night, sending me a link to the post CMA made on their Facebook page. The post reads in part:

“With heavy hearts, the Clearwater Marine Aquarium announced tonight that Winter the Dolphin died at approximately 8 p.m. as animal care experts from around the country worked to treat her gastrointestinal abnormality. The CMA family is devastated.

“During preparation for a procedure, the CMA Animal Care team observed that Winter’s behavior and vital signs were declining. The medical team tried several life-saving efforts, but she died being held by her caregivers.

“‘While we are heartbroken by Winter’s death, we are comforted knowing that our team did everything possible to give her the best chance at survival. We worked with specialists and marine mammal experts from around the country to provide her with the best care available. Our staff worked around the clock during this challenging time,’ said Veterinarian Dr. Shelly Marquardt, DVM, CVA. ‘I’m honored to work alongside such dedicated and talented professionals who gave their all for Winter.’

“The CMA team expresses our deepest gratitude to the thousands of people from around the world who sent caring messages for Winter. She truly inspired hope and was loved by millions of people worldwide.

Nathan Gamble, who portrayed Sawyer Nelson in both Dolphin Tale movies, posted the following on Instagram:

“This dolphin wasn’t even suppose to live. Normal procedure to losing a tail was dying.

“But Winter wasn’t normal. She fought. She overcame. She lived. During this continuous battle, she touched and inspired the lives of MILLIONS of people, and of course will continue to touch and inspire. Winter has passed, but her legacy and her message of persevering during times of great pain will never be forgotten.

“Am I sad? Devastated. But I can’t help but feel grateful that this silly diva dolphin that I fell in love with was with us as long as she was.

“Also I don’t care what your theology is, I WILL SEE WINTER IN HEAVEN!”

Cozi Zuehlsdorff, who portrayed Hazel Haskett in both Dolphin Tale movies, posted a video on Instagram, shown below:

Along with my sister and many others who witnessed Winter’s determination to recover, I found strength in Winter’s story and her journey throughout the years due to my own challenges. When the respective movies came out in 2011 and 2014, I was among the first in line to see them, wanting to be reunited with someone we considered part of the family, as Zuehlsdorff so eloquently stated in her Instagram video.

I will always keep Winter in my heart, as will the millions of others she inspired.

Rest In Peace, Winter. We love you.