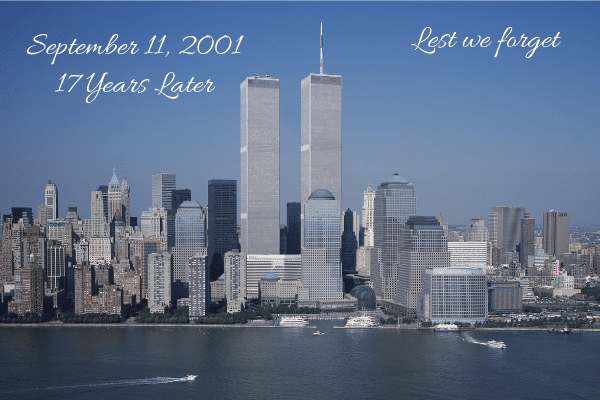 Disclaimer: 2019 is the last year that any student in K-12 may have been alive to remember the events that occurred on 9/11/2001. I wanted to write this post to educate them on what happened.

Much gratitude and many thanks to my friend, Earl, for their reflections of the day for this blog post.

This post was supposed to be written last year, but I finished compiling everything after the anniversary, so I thought I would create two posts and post them: this one on the eve of the eighteenth anniversary, and the other on the anniversary.

My thoughts and prayers are always with the families of those lost that day.

Every year—especially over the last few years—I find/have found myself staying up on the eve of September 11th, watching my clock turn from 11:59pm on September 10th to 12:00am on September 11th. This year was no different, although I immediately started feeling the global sadness in the early hours of the morning.

When asked to reflect on the events and his feelings on that day, my friend Earl said:

At the time of the September 11th attacks in 2001, I was a bartender in Atlanta, Georgia. I worked late into the nighttime and had gotten to bed around 5 am. I was suddenly awakened by my apartment mate at the time shortly after 10 am, telling me to turn on the TV because one of the World Trade Center towers had fallen.  He then left the room to go back to his room. In a confused daze, I turned on my little 13-inch color TV I had in my bedroom and saw a scene that didn’t seem real. Part of me wondered if I was still sleeping. I had tuned in after so much had already happened and I was trying to catch up. Then, the second tower fell.

That’s when reality hit me. I was glued to the news and found myself in a trance of disbelief, shock, and sadness.

Later, I had to get ready to head into work again for that evening. I walked to work and there was an unusual, eerie quietness around. Few vehicles were on the streets. Silence in the sky in the city with the busiest airport in the country. A lack of people all around. It was unsettling.

I arrived at the large bar that I worked at. The few of us that were there had all the TV’s on and we watched while preparing and setting up for opening at 4 pm.  When we did open, a few came in to also watch the news while drowning their disbelief. There were also those that came in and had no idea what had happened. They had no TV or hadn’t turned one on. They hadn’t heard yet about the horrors that occurred. That was a time before social media, instant news notifications, and smartphones. Word traveled by neighbors, landline telephones and just happening to turn on the television. When they arrived, and asked what was going on, they learned from others there and by seeing the coverage on the screens throughout the building.

Later in the evening, there were only several people there and we were scheduled to have Karaoke. One person signed up to sing. He did ‘It’s The End of The World As We Know It’ by REM. After that, we ended up closing early.

In the days that followed, shock and sadness turned into grief and anger, but I tried to keep busy. Work continued and people started coming out again. Many just needed to be around others to share their stories and hug one another. Once planes were no longer grounded, I saw my first one after days of none. I was walking to work and the sight of it coming in low to land at the airport made my stomach sink at first.

It’s been 17 years and it still feels relatively fresh. Time will continue to separate us from that day, but for those who were around and lived through the horror and fear that the attacks instilled upon us, I think it will always feel more recent than it is.

The Tower of Voices is the building that was dedicated to the passengers and crew who perished on Flight 93 on that fateful day in September 2001. It was dedicated two days before the seventeenth anniversary on September 09, 2018.

You can read more about it here: Tower of Voices | National Park Service.